Get buy-in: leadership lesson from "Salmon Fishing in the Yemen" 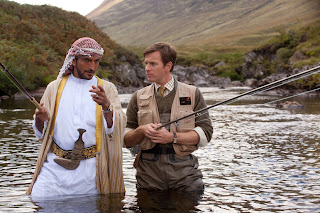 There will come a time in your in-house career when you are a visionary. And you fail at it, because you misjudge what you can accomplish and how. That's my leadership take-away from Salmon Fishing in the Yemen, a British romantic comedy-drama film viewed this weekend.

If you're in a legal-compliance risk-mitigation role, you often see things others do not. You have this vision where the organization needs to go. You do a decent job at communicating the issues, the risks versus benefits, and the range of reasonable solutions. You may encounter problems, however, if you skip critical next-steps, as illustrated in Salmon Fishing.

The terrifically enjoyable film stars Ewan McGregor, Emily Blunt, Amr Waked, and Kristin Scott Thomas. The visionary in Salmon Fishing is a fictional Sheikh of Yemen (Waked). He believes his passion for salmon fishing can enrich the lives of his people and turn the fish-unfriendly desert into a green agricultural landscape. Willing to spare no expense, the Sheikh enlists the aid of Britain's leading fisheries expert (McGregor), who thinks the project is absurd and unachievable.

Of course, they succeed, but only to have the project sabotaged and destroyed by the Sheikh's countrymen, who object to introducing such a Western concept as salmon fishing into their ancient culture.

Although disappointed, the philosophical Sheikh proclaims that he has learned an important lesson: "I expected people to understanding what we were doing here. I expected them to see that it was really not about fishing at all. In the end, I asked for too much."

The nerdy fisheries expert adds that, if this is going to succeed, "We need to involve the local community. Make it their project." Well said. And a perfect lesson for in-house counsel, too.

When you have your vision, it's unlikely to be as grandiose as introducing salmon fishing to an arid country. For your organization, however, it's a big change. Change management is most successful when it begins with achieving buy-in from "the community," from the top down to the rank-and-file. "Make it their project." It's a step too important to overlook.

Leadership is not just having the vision of change; it's the ability to effect change. It will help you to succeed at LeadingInHouse.sm

This summary was prepared by Perry Cone and posted at LeadingInHouse.com.

Perry Ian Cone
maintains this blog for in-house counsel from his unique perspective as a general counsel, executive, and leader in the insurance industry.